Home
|
Archives
|
On Alive with Clive: The Metamorphosis of Talented and Inspiring Singer-Songwriter, Chuck Ramsey — from Quiet, Reserved and Introverted to Dynamic, Exciting and Fully Self-Expressed — Continues to Gain Momentum!

Are introverts extroverts who’ve retracted to become introverts or merely put their extrovertness in suspense for a while?

No conclusive answers emerge from the many articles and Blog posts that have been written about these intriguing conundrums.

Mention is made of them here, though, because they’re bound to enter your consciousness if you’ve been paying any attention to the musical career of talented and inspiring singer-songwriter, Chuck Ramsey.

After what seemed like a six-year hiatus, Chuck recently released his latest single “One of Us,” a song he co-wrote with Grammy winner, Scot Sax.

Lately, he has also been developing a knack for posting uplifting and humorous posts on social media, thanks to support and encouragement from his wife, fellow singer-songwriter and skillful social media maven, Lesley Barth, whom Chuck accompanied when she was on Alive with Clive in June of 2017. 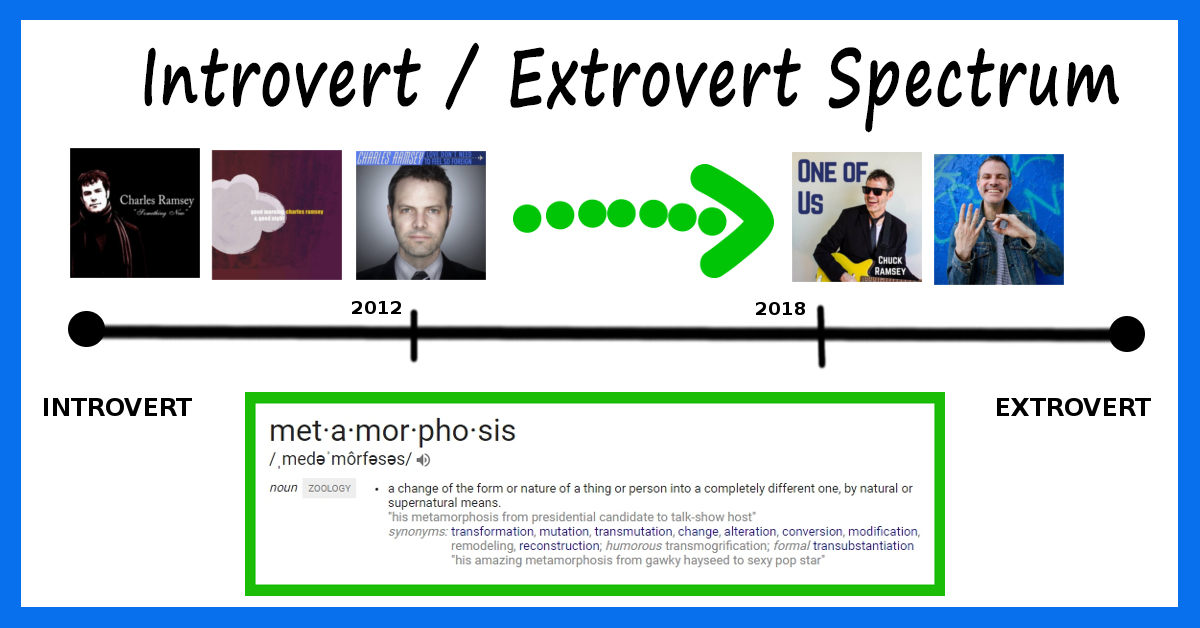 Chuck’s professional music career began as an undergraduate at Penn State University, where he divided his time between the basement practice rooms in the Music Building (he was a trombone performance major) and the downtown bars (where he played guitar and trombone with a psychedelic indie rock band).

His time with this band gave him his first taste of the touring life — loading up an old van on weekends and taking off to play shows in Washington D.C., Pittsburgh, Philadelphia, and New York City.

It also gave him the confidence to record his first solo album, Something New, which he wrote largely in those same basement practice rooms and released in April, 2005.

After Chuck earned his Master’s degree in Music Theory/History, and served as an instructor at the university for a few years, he realized he could no longer resist the call to honor his passion to write and perform songs, so he returned to his hometown of Philadelphia – paying his rent with that classic musician’s dual career: teaching guitar and piano lessons and serving up lattes in a South Street coffee shop — and released his second record, Good Morning & Good Night in June, 2009, before moving to New York City in 2011.

Soon thereafter, he released his third record, Love Don’t Need to Feel So Foreign, in May of 2012. 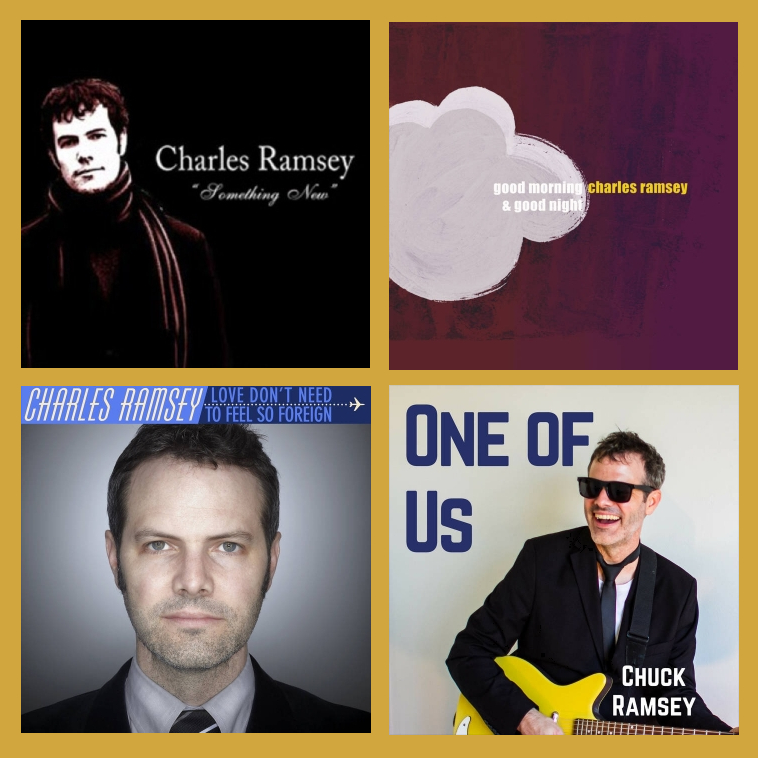 We can all derive a great deal of inspiration from Chuck’s journey, in that, over the years, he has done whatever he needed to do to keep the flame of his core passion alive – from playing guitar and singing in an Irish pub just off Times Square five nights a week, to playing the pipe organ in churches in the city on Sunday mornings, to playing in piano bars, to performing at kids’ concerts and birthday parties, and teaching a singing class to undergraduates in NYU’s School of Theatre.

During this time, he has continued to write and record songs; he made trips to Los Angeles to co-write songs and perform in such legendary West Coast venues as the Viper Room and the Whisky-a-Go-Go; and a writing partnership he formed with Paulie Z, star of the IFC series Z-Rock and frontman of ZO2, resulted in Paulie’s first solo EP, and their song “Here We Are” being used in the movie “The Last Movie Star” (2018) starring Burt Reynolds and Ariel Winter.

Now, Chuck is beginning to release the songs he wrote in the six-year period since 2012 during which his creativity was quietly being harnessed to produce a harvest.

On Alive with Clive, Chuck listed Paul Simon, The Beatles, Paul McCartney, Bob Dylan, Brian Wilson from The Beach Boys and Neil Hannon, who performs as The Divine Comedy, as his top musical influences.

And as noted on Alive with Clive, his songs – with their catchy melodies about down-to-earth topics to which we can all relate – leave you with the kind of enjoyment and appreciation you derive from songs like “All You Need is Love,” “Yesterday,” “I Wanna Hold Your Hand,” “Here Comes the Sun,” and “While My Guitar Gently Weeps” by The Beatles.

In Chuck’s 1st Show on Alive with Clive, he performed his latest single, “One of Us,” and three of the five songs from Love Don’t Need to Feel So Foreign.

In his 2nd Show, two of the four songs he performed are from Love Don’t Need to Feel So Foreign, “It Don’t Take Much” is from Something New and “She Changes You” is from Good Morning & Good Night.

Here are the lists of the songs Chuck performed in his two shows on Alive with Clive: 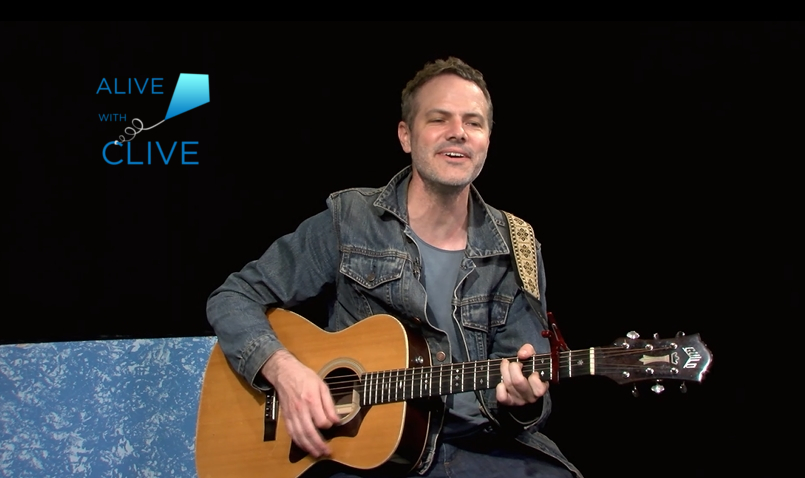 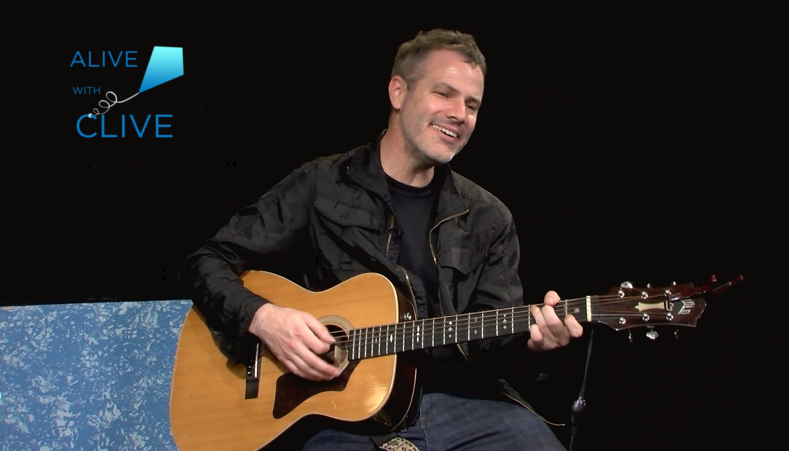 Although in his two shows on Alive with Clive, Chuck performed all eight songs on guitar, if you see him perform at a live show you’ll realize immediately he is equally at home on guitar or piano.

In light of the depth and breadth of talent that he has been developing with the dedication of an Olympic athlete over the past decade and a half, to see Chuck Ramsey perform at a live show is a chance to see a true master of his craft in action — and be entertained and moved at the same time.

If you’re reading this Blog post before Tuesday, August 21, 2018, and will be in New York City on that day, note that Chuck will be performing with his band at Rockwood Music Hall on Tuesday, August 21, at 8 p.m. So that is a golden opportunity to see him in action live.

If you’re reading this Blog post after August 21, 2018, or are not in New York City, you can always visit his Web site at chuckramsey.com to see when and where he is scheduled to perform live next.

In the meantime, though, wherever you are, as long as you have an internet connection, you can enjoy his 1st Show and his 2nd Show on Alive with Clive right now. 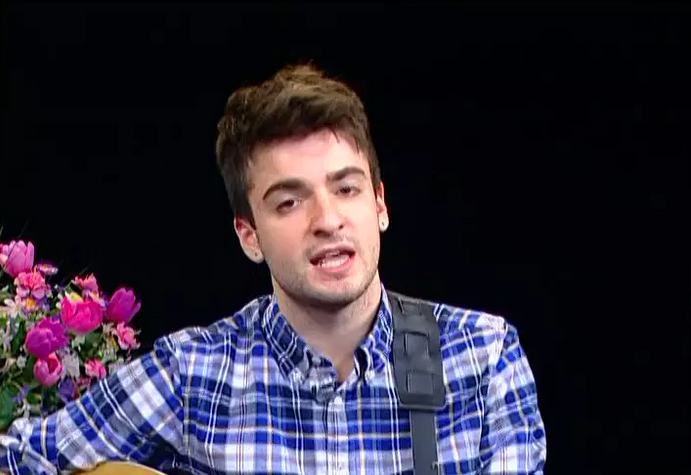